What the Steel Tariffs Mean for ACE Customers

The Steel Tariffs imposed by the Trump administration have garnered significant interest; especially in our industry, where both steel and aluminum play a primary role.

This is hardly the first time a sitting President has imposed a tariff on steel. As early as 1979, then Treasury Secretary Alexander Hamilton proposed a series of tariffs, including one on steel, each of the new tariffs was accepted.

Often, it is tough to distinguish fact from fiction as we wade through the political commentary to understand how legislative decisions, such as this one, influence our industry.

Why Are We Worried About Excess Steel?

Steel production in China has steadily increased over the last five years.

In a statement issued earlier this year, Chinese officials revealed that they would be unable to absorb the increased steel and aluminum production internally and, as a result, would export it to the rest of the world.

Since the consumption of steel and aluminum is relatively stable, this increase will affect the market. In other words, the supply of steel will outpace the demand causing prices to drop.

The steel industry is worth about $900 billion a year and is seen as a gauge of the world’s economic health. – Fortune

Why is this a bad thing?

The United States steel industry dates back to the Colonial period and is significantly influenced by one of the most powerful unions in the nation, the United Steelworkers Union. As a long-standing part of the American economy, any threat against the US steel industry’s stability is quickly recognized and mitigated.

When supply surpasses demand, there are three economic responses:

The steel tariffs are meant to prevent China from driving down the cost of steel in the United States and promote healthy growth of US steel production.

If the tariffs are meant to discourage the steel imports and encourage domestic purchasing, then China must be the largest importer of steel in the United States, right?

Where Does the United States Get Its Steel?

This leaves the impact of the tariffs to be most significant in Japan, Russia, and Turkey. However, as a very limited supplier of steel to the United States, the impacts of the tariff in China are not keenly felt. 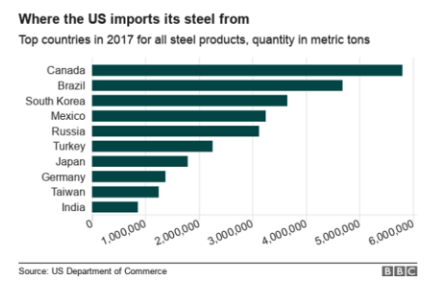 What Does All of This Mean to the Cost of ACE Blades?

However, this is unlikely to be the case.

Long-term sustainment of the tariffs is highly unlikely. Not only do tariffs like this alienate key political and trade partners, but they also do little to provide sustainable protection of the US steel industry.

American Cutting Edge has always relied only on responsibly-sourced materials of the highest quality. That is how we do business, and it is how we will continue to do business.

We know that our customers have come to rely on us for our expertise and our experience, in both the design of superior industrial blades and in the logistics and manufacturing processes that make those blades available at the lowest possible price.

We value that trust and stand ready to leverage our experience to ensure that the new steel and aluminum tariffs have minimal impact on ACE customers.